An old-fashioned newspaper columnist once told me that writing a daily column meant sacrificing his day to thinking up the next column. “It’s a bitch of a mistress,” he said. “She takes up every waking minute.” I don’t know what running a literary magazine entails exactly but I can’t help thinking it, too, is a bitch of a mistress, and that brings me to Karen Mulhallen who celebrated the last issue of Descant Magazine tonight with her staff and a packed house at the Supermarket in Toronto’s Kensington Market. 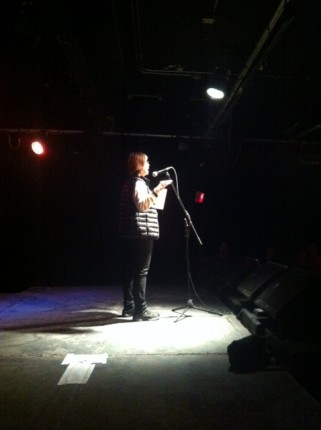 Karen has run Descant for over 40 years; as its editor-in-chief, she thought up the concepts, she found the staff and the funds (often from her own pocket) and she created a Descant community based on writers, artists, and people who walked in off the street and who had never heard of a literary magazine before along with dozens of young interns who often became Descant contributors after they left. Like many literary journals, Descant was not just a magazine; it was a community. But I don’t know any other journal that lets an intern become the production assistant who puts out the issue. Or that was so open to new writers. When I was teaching creative writing at York University, I used to tell my students to be sure to send their work there because the editors were watching for new talent and not just publishing their friends on the board.

Descant was also notable for its design flair and for its appreciation of creativity in general. Tonight Karen said the human brain was a cabinet of curiosities (the theme of its last issue, Number 167) and she told us she’d wanted the magazine to be a picture of the human imagination.

My own connection to Descant goes back to 1978 when Karen published an excerpt from my first novel, The Biggest Modern Woman of the World, about the giantess Anna Swan. It was my first literary publication and Karen ran the excerpt from my then unpublished book under the heading, A legend is born. I’d never met a literary magazine editor before or asked for funding support, which is what writers often ask of literary editors. So at my first meeting with Karen in her glamorous apartment on Washington Avenue near the University of Toronto, I was awestruck. She asked me how much money I wanted and I said, As much as you’ve got! She laughed and scolded me. That wasn’t the way to ask for money, she said, and told me to come back with a carefully worded budget. I did what she said. As many, many writers before or since have done.

Descant, number 167, is on sale at some bookstores and it is the last issue of a literary gemstone. For those who want to say good-bye to the magazine there will be a wrap part March 25 at Revival in downtown Toronto. The photograph here is of Kay Armatage, U of T prof and former TIFF programmer, reading from her essay about women’s film festivals in this issue.

Thank you, Karen, and thank you Descant for helping not only my generation but many generations that followed to find our voices.