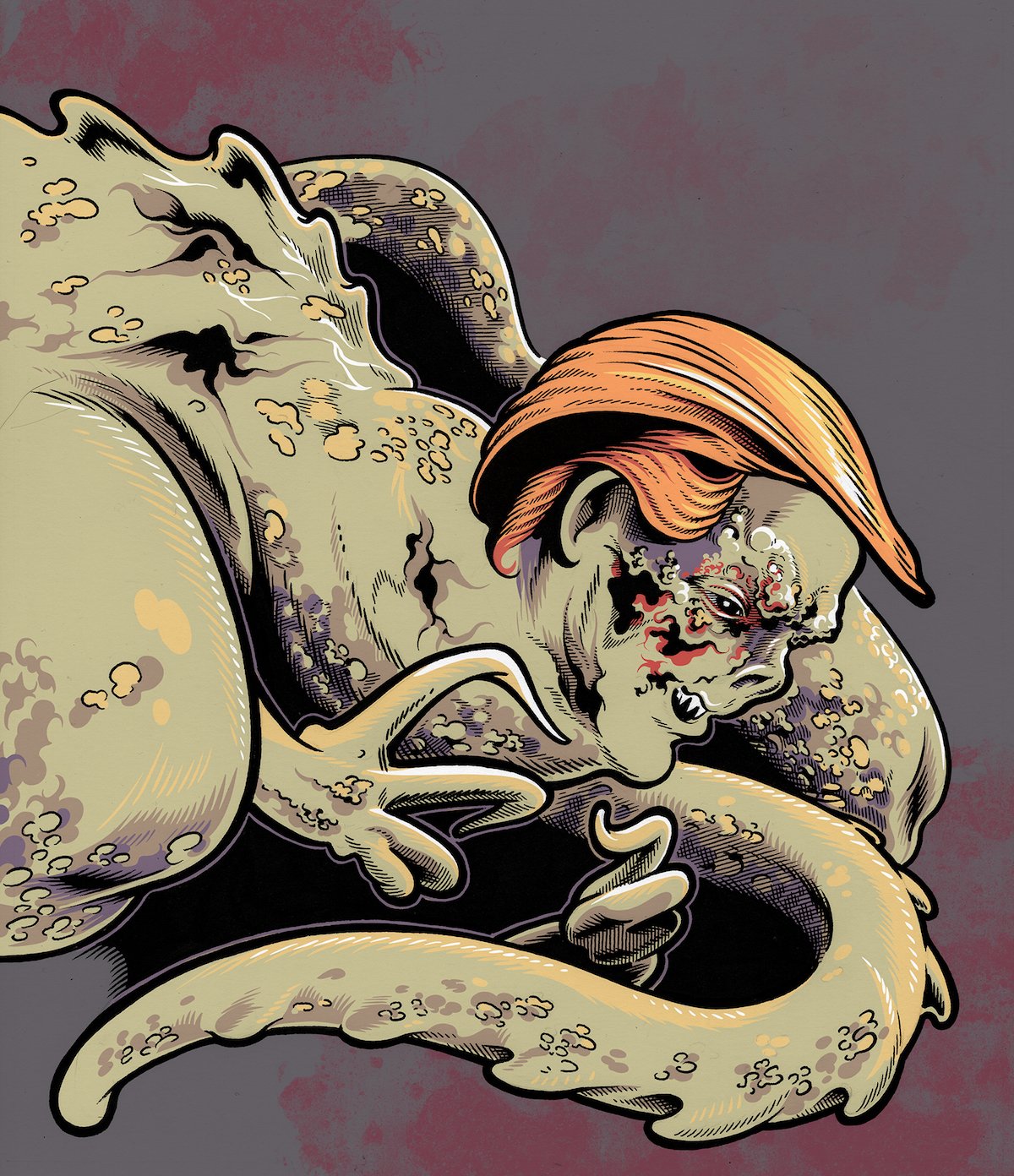 An Unpublished Short Story from The Dead Celebrities Club.

He was called lizard man at school but he didn’t let it bother him. He isn’t really scaly. The look of his skin is closer to a mild case of psoriasis. Red, blotchy – sometimes inflamed. Definitely not scales, although he knows some lizards don’t have scales as such. They have leathery skin, and a leathery sensation is what you would feel if you touched him intimately.

Above the neck he is normal, more or less – aside from the bulb at the base of his throat that he prefers not to mention. He wears shirts buttoned up to his neck so it’s covered over. The other part of him, the nether part, is bound up tightly against his back. It hurts when he sits in a chair but not always. Some days the tissue is softer than others. He has learned to live with that fact.

He gets angry if anyone mentions the bulge under the back of his suit jacket. “So I have put on a few pounds,” he snaps. “What’s your problem?” It’s not the only bit of him that is tucked up. He’s a tucked-up kind of guy. Nothing wrong with that, although he is older now, and horrible things could be happening to his insides.

His ticker, for instance. He scoffed when his doctor told him to take it easy with the campaigning. He never phones it in. That’s his genius. No matter what he says, he believes what he says when he says it. A real liar doesn’t believe his lies, right?

He will give it his best shot today although his handlers want him to wear a body shield that fits over him like a plastic bubble. Who the fuck do they think he is? Darth Vader? The body shield with its metal mouthpiece is going to make him look weak. But they insist. They say there have been bomb threats, and worse.

There will also be security drones flying around the ones with gizmos like radar that help them dodge obstacles.

It will be hot inside the plastic dome. He sweated like crazy when he tried it on. And his sweat stung because his skin is so dry. His condition is worse. His condition. Is it something in the water? Now there are more and more people like him. Mostly men, of course, although he isn’t sure why he added “of course.” A subliminal prejudice against his gender, maybe.

People mimic his mannerisms, even his posture. There’s no mistaking his ability to attract women and intimidate his rivals. It took him years to develop the display structures that befit a man like himself.

He heads for the stage, moving from side to side in characteristic fashion. His slender, dignified wife smiles encouragingly. She advised him to obey his handlers and wear the plastic body shield. So he’s doing it for her. Staying safe so she feels safe.

The crowd’s eager voices, their flailing arms fill him with satisfaction. This is a righteous thing. Enjoying the admiration of thousands, the way he basks in the afternoon sun at his oceanfront retreat. Free from prying eyes, he sprawls in a lounger, sliding his tongue in and out, savouring the salty breeze.

Will there be air in that goddamn thing? He doesn’t want to suffocate. When he reaches the stage, he jokes that his handlers are turning him into a Russian babushka doll. The crowd roars with pleasure. They’re an easy laugh.

But not all of them are laughing. Some goofs in the row behind his wife are scowling. He flicks his tongue at them once, twice. Then he hitches up his pants and stands like an American war hero as his handlers lower the thing over his head. He thinks he hears frightened shrieks although he can’t hear as well as other people. He looks out through the klieg lights, trying to see what is making them crazy.

There is nothing to fear. He has command of the room. He takes several good sniffs inside his dome. The air tastes slightly bitter, like the kale smoothies his wife makes. It’s all good. He is safe and sound inside his full-body shield.

He feels as dangerous as a Komodo dragon. He loves their ugly snouts, beaded with shiny scales. Above his head, hundreds of security drones are gliding back and forth. They are protecting him. Nobody can hurt him now. He says hello to the crowd through his mouthpiece.

His fans shout back but something is wrong. The drones have convulsed in a ball around him, and he is falling backward against the plastic shield, his jaws oozing a weird greenish froth. The security guards lift off the plastic dome and he crumples to the floor. He hears a ripping sound as his dewlap bursts through his collar. There’s a light pulsing in his fracture planes, followed by a louder ripping noise, and a sudden weightless sensation at the back of him. He smiles sheepishly. A writhing snake-like object lies twitching on the stage. The crowd utters a horrified cry while the thing jerks and quivers in a puddle of body fluids.

It is what it is, he thinks, as the voices in the crowd grow fainter and fainter until the noise sounds far off, like the distant thunder of surf on the Florida shore.

Susan Swan is a Toronto-based writer. Her latest novel is The Dead ­Celebrities Club.

← Literary Review Of Canada: Double Or Nothing
Why don’t more Canadians know about Constance Beresford-Howe? →